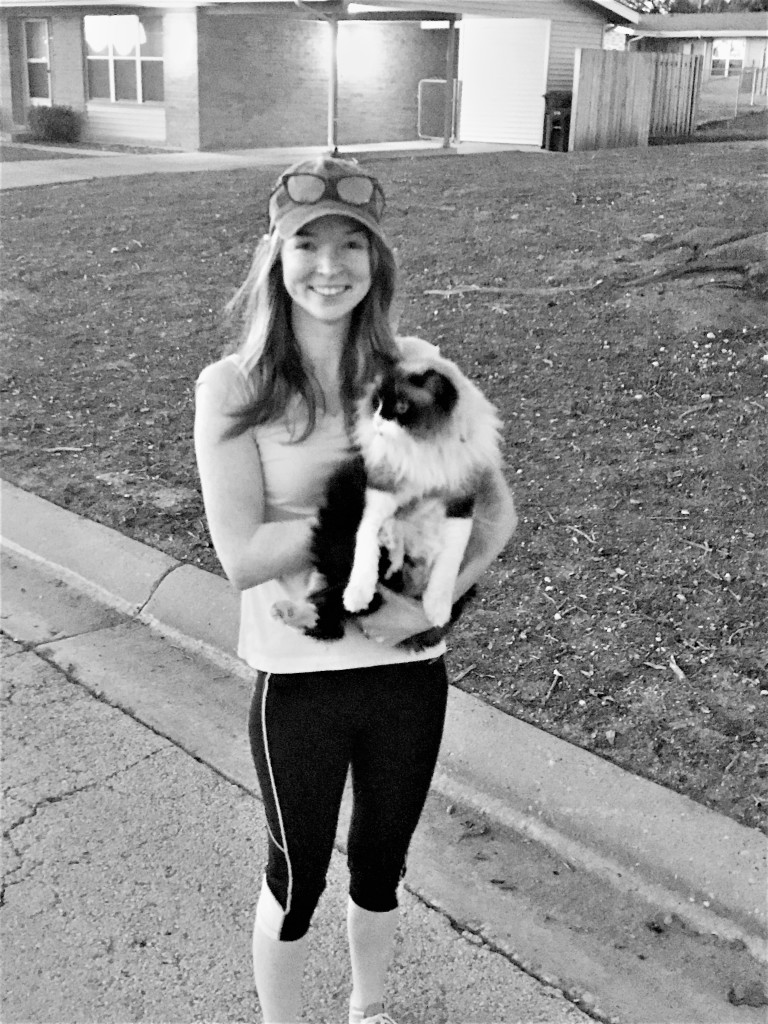 Yesterday evening, my husband took this picture of me.

I often think about old photographs and the stories that accompany them through the years, memories from our parents and grandparents that we discover in boxes and then ask about the whole story. Inevitably there are some photos whose tales have been lost in time, my parents or siblings unable to explain the history. Who is that man standing next to Grandpa? Was this taken in Louisiana? What were they doing there? But didn’t he live in Pennsylvania?  Did Grandma take the photo?

If my future grandchildren find this particular photo–me at twenty-six, holding a cat nearly as big as me–they might wonder: Is that Grandma’s cat?

The answer will be no. That is not Grandma’s cat.

This blurry picture was taken at dusk on a Monday evening, but the story really began on Sunday. We’d taken a trip to Dallas to visit my best friends and returned home to find our carport door ajar.

Uh oh, I said as we pulled into the driveway. When you live on a tiny Air Force base, locking your doors is not a common practice. This time, however, our door hadn’t even latched properly and the dry, Del Rio wind had blown it open.

We quickly unloaded our bags and stepped inside the house. Scott went ahead of me, looking for potential intruders–human or otherwise. I was fully prepared for a giant raccoon to jump out at any moment, ready for battle over his new territory. Luckily, all appeared normal. No rodents. Nothing out of place. Our dog, Ralph, sauntered around until he decided to take yet another snooze for the day.

About thirty minutes later, I was blissfully lounging on the couch–deciding whether to watch an episode of Fixer Upper or make the tacos I’d promised for dinner–when Scott walked into our bedroom.

My heart raced. Whenever I am unsure of the specific danger I’m about to face, my mind immediately conjures my greatest fear: snake. It’s a snake.

Bracing for the worst, I reluctantly tiptoed to where Scott stood. I used him as my shield and peeked around his tall frame. The fluffiest cat I have ever seen sat atop our bed, lazily staring at us as if to say, “Oh, hey. You’re home.”

We stood, mouths open, afraid to move lest we spook the thing and end up having to fish him out from under our bed. Images of claws and teeth flashed through my mind, but the cat just stared at us. And we stared back, laughing.

Scott took a step and the cat flinched.

“Maybe you should try instead,” Scott told me. “I’m too…”

“Intimidating?” I offered. He nodded. I inched forward with an outstretched hand. “Hi kitty,” I crooned. “You’re a pretty kitty, good kitty, what the hell are you doing here kitty? Easy kitty.”

The cat didn’t even move as I stroked his long, soft coat and whispered sweet nothings to him. He purred contentedly, and I chuckled. This was no feral cat. This was a housepet of the highest order. Soon I discovered an important accessory–a rather feminine collar. The cat’s name was Monroe and he was a she.

“Let’s just put her back outside,” Scott suggested.

I scratched behind Monroe’s ears, immediately protective. “Oh babe, she seems like an inside cat. She’s not cut out for life on the streets.”

Scott rolled his eyes. “She’ll be fine. There’s pet cats all over this neighborhood. She probably just wandered out of her yard and found our open door. She’ll find her way home.”

Reluctantly, I coaxed Monroe out the front door and onto our sidewalk. When I closed the door behind me, I watched her through the window. She glanced around, sniffed a plant in the flowerbed, and looked at me.

“Oh, she’ll be alright. Don’t you worry about it.”

I walked away, found Ralph and scolded him for being the worst guard dog in the world. “You have one job! And you decided to take a nap instead! What if it had been a possum? Or a coyote?” Ralph just yawned.

Later that evening, I scrolled through our base-wide Facebook page to check on the latest news. My blood ran cold when I saw a photo of a familiar cat staring back at me. “Our sweet, fluffy cat, Monroe, has been missing since last night,” the post said.

Thus began the 24-hour hunt for a total stranger’s cat. I berated myself for not listening to my instincts. Of course she was way too docile to survive outside for long! The feral community is NO place for a lady like Monroe, I thought. I stared out the window, hoping to catch a glimpse of her in the streetlights. Seeing nothing, I vowed to begin my search the next day.

Ralph and I took a spin around the neighborhood, checking under cars and keeping our eyes peeled for any little movement. We walked and walked, but never saw any cat, much less Monroe.

Scott came home from work and–keenly aware of his wife’s emotional state– suggested we look again. Several cats lounged in driveways, but none were Monroe. We came home, defeated, and I gazed out the window yet again. I’d let her slip right through my fingers and now she was probably a bobcat snack. Glumly, as the sun went down, I suggested we head into town and eat at Chick-fil-a.

I was tying my tennis shoes when Scott opened the carport door. “Kristen!” he yelled. “It’s her!” We bolted outside into the dusky evening and watched her furry frame traipse across the street. I followed.

“Monroe!” She immediately stopped and looked at me. “Hi baby,” I whispered in our neighbor’s yard to a different neighbor’s cat. To the untrained eye, I’d lost my mind.

Monroe cocked her head and miraculously walked towards me. I crouched down and snatched her. “It’s really you, you big dope! Where have you been? I thought you were a goner!” I reached for her tag again, and this time I read the numbers to Scott, who quickly dialed.

Monroe’s owner sounded overjoyed, but they were out to dinner. “Just open our front door and set her inside, if you don’t mind,” she told Scott, thanking him profusely. Those unlocked doors really come in handy, I guess.

I picked up Monroe, cradling her like a big, fluffy baby. She lived just a few houses down and we soon deposited her safely inside.

So, future grandchildren, that is the way the story goes. How on a January evening, your grandfather took a photo of me in the middle of our street in Del Rio during our first assignment, clutching a stranger’s cat to my chest for dear life, grinning from ear to ear like a madwoman.

And until I wrote this, our secret was safe with Monroe.

Sorry. No data so far.